This article is about the most powerful Will Smith memes that will inspire you and help you to get motivated. His outstanding talent as an artist mixed with his growth mindset helped to elevate him to where he’s at today. Willard Carroll Smith Jr. (born September 25, 1968) is an American actor and rapper. Newsweek called him “the most powerful actor in Hollywood”. Smith has been nominated for five Golden Globe Awards and two Academy Awards, and has won four Grammy Awards..[1] 1-“Set a goal so big that you can’t achieve it until you grow into the person that can“- Will Smith 2-“I’ve always considered myself to be just average talent and what I have is a ridiculous insane obsessiveness for practice and preparation.„- Will Smith 3-“Life is lived on the edge.„- Will Smith 4-“If you’re not willing to work hard, let someone else do it. I’d rather be with someone who does a horrible job, but gives 110% than with someone who does a good job and gives 60%.„- Will Smith 5-“I have a great time with my life, and I wanna share it.„- Will Smith 6-“The first step is you have to say that you can.„- Will Smith 7-“Greatness is not this wonderful, esoteric, elusive, god-like feature that only the special among us will ever taste, it’s something that truly exists in all of us.„- Will Smith 8-“In black neighborhoods, everybody appreciated comedy about real life. In the white community, fantasy was funnier. I started looking for the jokes that were equally hilarious across the board, for totally different reasons.„- Will Smith 9-“Too many people spend money they haven’t earned, to buy things they don’t want, to impress people they don’t like.„- Will Smith

10-“Too many people spend money they haven’t earned, to buy things they don’t want, to impress people they don’t like.„- Will Smith This Will Smith Meme is one of my favorite :) 11-“I wake up every morning believing today is going to be better than yesterday.„- Will Smith 12-“I’ve trained myself to illuminate the things in my personality that are likable and to hide and protect the things that are less likable.„- Will Smith 13-“Life isn’t how many breaths you take, but it’s the moments that take your breath away.“- Will Smith 14-“Throughout life people will make you mad, disrespect you and treat you bad. Let God deal with the things they do, cause hate in your heart will consume you too.„- Will Smith 15-“Traditional education is based on facts and figures and passing tests - not on a comprehension of the material and its application to your life.„- Will Smith 16-“Fear is not real. The only place that fear can exist is in our thoughts of the future. It is a product of our imagination, causing us to fear things that do not at present and may not ever exist. Do not misunderstand me danger is very real, but fear is a choice.„- Will Smith 17-“Whatever your dream is, every extra penny you have needs to be going to that.„- Will Smith 18-“Money and success don’t change people; they merely amplify what is already there.„- Will Smith 19-“And where I excel is ridiculous, sickening, work ethic. You know, while the other guy’s sleeping? I’m working.„- Will Smith

20-“Stop letting people who do so little for you control so much of your mind, feelings & emotions„- Will Smith This Will Smith meme teach us to not let people that do little for us to impact negatively our lives. 21-“There’s no reason to have a plan B because it distracts from plan A„- Will Smith 22-“Whatever your dream is, every extra penny you have needs to be going to that.„- Will Smith 23-“Being realistic is the most commonly traveled road to mediocrity.„- Will Smith 24-“We all want to be in love and find that person who is going to love us no matter how our feet smell, no matter how angry we get one day, no matter the things we say that we don’t mean.“- Will Smith 25-“In my mind, I’ve always been an A-list Hollywood superstar. Y’all just didn’t know yet.„- Will Smith 26-“You can cry, ain’t no shame in it.„- Will Smith 27-“If you don’t fight for what you want, don’t cry for what you lost.„- Will Smith 28-“I don’t know what my calling is, but I want to be here for a bigger reason. I strive to be like the greatest people who have ever lived.„- Will Smith 29-“I’m a student of patterns. At heart, I’m a physicist. I look at everything in my life as trying to find the single equation, the theory of everything.„- Will Smith 30-“I know who I am, I know what I believe and that’s all I need to know.„- Will Smith This is definitely one of the most inspirational Will Smith Memes…Short & Sweet

31-“If you’re absent during my struggle don’t expect to be present during my success.„- Will Smith 32-“If you’re not making someone else’s life better, than you are wasting your time. Your life will become better by making other people’s lives better.„- Will Smith 33-“A rapper is about being completely true to yourself. Being an actor is about changing who you are.„- Will Smith 34-“Don’t chase people. Be yourself, do your own thing and work hard. The right people – the ones who really belong in your life – will come to you. And stay.„- Will Smith meme 35-“My skin is hard when it comes to my music. But with my movies, I’m still a virgin in a lot of ways. I’m not used to being shot down for no reason.„- Will Smith meme 36-“The separation of talent and skill is one of the greatest misunderstood concepts for people who are trying to excel, who have dreams, who want to do things. Talent you have naturally. Skill is only developed by hours and hours and hours of beating on your craft.”„- Will Smith 37-“I mean, I’m very serious with my kids about them comprehending the intricacies of global finance.„- Will Smith 38-“Greatness exists in all of us.„- Will Smith 39-“I was raised in a Baptist household, went to a Catholic church, lived in a Jewish neighborhood, and had the biggest crush on the Muslim girls from one neighborhood over.„- Will Smith 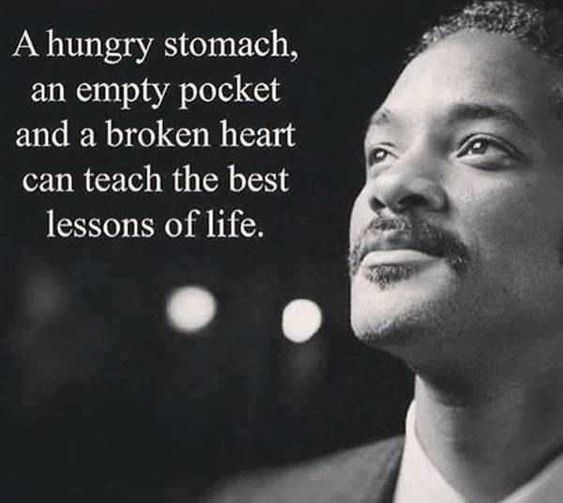 40-“A hungry Stomach, an empty pocket and a broken heart can teach the best lessons of life.„- Will Smith This Will Smith meme reminds me his movie, The Pursuit of Happiness, 2006. 41-“My school was 90 percent white, but 90 percent of the kids I played with were black. So I got the best of both worlds. I think that is where my comedy developed.„- Will Smith 42-“I love being black in America, and especially being black in Hollywood.„- Will Smith 43-“You can’t be scared to die for the truth. The truth is the only thing that is ever going to be constant.„- Will Smith 44-“Money & success don’t change people; they merely amplify what is already there.„- Will Smith meme 45-“The only thing that I see that is distinctly different about me is, I am not afraid to die on a treadmill. You might have more talent than me, you might be smarter than me. But if we get on the treadmill together, there’s two things. You are getting off first. Or I am going to die. It’s that simple.„- Will Smith 46-“Never underestimate the pain of a person, because in all honesty, everyone is struggling. Some people are just better at hiding it than others.„- Will Smith 47-“There’s no reason to have a plan B because it distracts from plan A.„- Will Smith 48-“The separation of talent and skill is one of the greatest misunderstood concepts for people who are trying to excel, who have dreams, who want to do things. Talent you have naturally. Skill is only developed by hours and hours and hours of beating on your craft.„- Will Smith 49-“If you’re absent during my struggle, don’t expect to be present during my success.„- Will Smith 50-“I believe you need to be educated about what you want to do in life, but I don’t believe you actually need college to get you there.„- Will Smith 51-“Never lie, steal, cheat, or drink. But if you must lie, lie in the arms of the one you love. If you must steal, steal away from bad company. If you must cheat, cheat death. And if you must drink, drink in the moments that take your breath away.„- Will Smith I hope you enjoyed these amazing Will Smith Memes. Go here to read more posts about Inspirational Quotes.